Finishing the year with a World Cup Jumping win at London’s Olympia Horse Show in December, Martin Fuchs opened 2020 as the world #1 ranked show jumper. It was the close of a remarkable decade for the 28-year-old and the beginning of what looks likely to be another.

December’s victory was one of 27 international Grand Prix wins in 2019 alone. It added to his win of the World Cup qualifier in Lyon, France, positioning him perfectly to continue an outstanding qualifying season heading into the April Finals in Las Vegas, a Finals in which he was reserve champion in 2019. World Equestrian Games individual silver in 2018 and top spots at the 2019 FEI Longines European Championships and Longines Global Champions Tour are additional highlights. An FEI Best Athlete Award nomination in 2019 was icing on the cake.

Sure, 28-year-old Martin has had advantages. “Professional equestrian” was his life goal as a 7-year-old and he was born into the perfect family to foster it. His father Thomas Fuchs and his uncle Markus Fuchs are both Olympic show jumpers, and horses extend through several generations of the Fuchs family.

Just as with horses, however, bloodlines are only one component of success.

Fans throughout the world see Martin precisely navigating his stellar string of superstars through the world’s toughest jumping tracks. But they don’t see what goes on behind the scenes. They weren’t there, for example, when his European Championships and WEG partner Clooney 51 suffered a severe colic in mid-2017.

After finishing fourth in that year’s World Cup Final, Clooney was returning to a small show after a break from competition. He arrived at the show in Italy nervous and ill at ease, starting what became “a terrible night,” Martin told the Chronicle of the Horse. He was immediately sent from the competition to Zurich, Switzerland for surgery, which, happily, went well. Although Martin typically tries to ride four to six of his top and young horses every day, he was there every 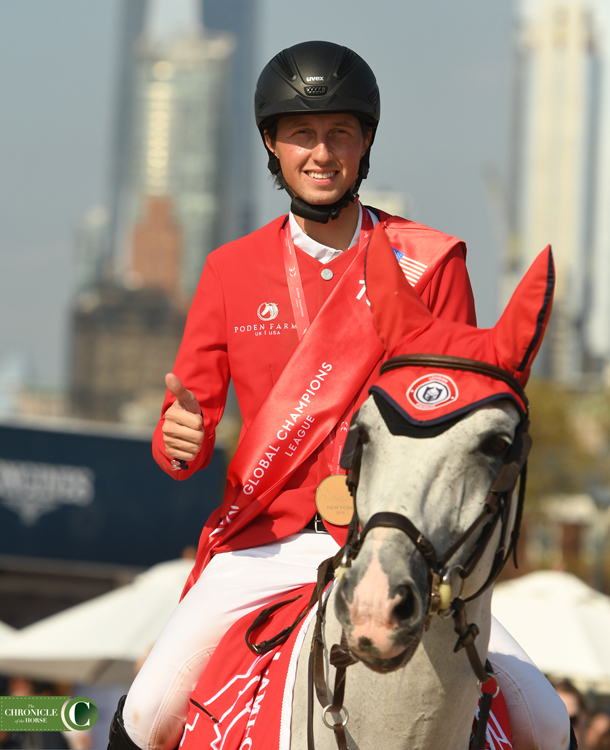 step of Clooney’s slow recovery: taking two-hour shifts on the stall video monitor when Clooney first returned from the hospital, then three and four hour hand-walks when he was well enough for mild exercise.

That level of horsemanship explains Martin’s interest in both Haygain steamed hay and ComfortStall Sealed Orthopaedic Flooring. He began steaming hay about a year ago :

“I’ve noticed a good difference in my horses’ breathing.” Like many of his contemporaries at the top of the sport, Martin considers steaming critical at home and shows. “Especially at shows, there is usually a lot of dust in the hay and in the barn.”

Developed 11 years ago in conjunction with respiratory health research at the Royal Agricultural University in the U.K., hay steaming has extensive science proving its ability to eliminate up to 99% of dust, mould, fungi and bacteria found in even top-quality hay. Martin, however, didn’t need the science to see steaming’s benefits: “It just made sense to me,” he said of his decision to add it to the program.

Although they were not able to determine the cause of Clooney’s colic two years ago, the fact that hay steaming increases hydration in the horse’s diet is a great preventative measure for healthy digestive function. The proven palatability it adds also helps picky eaters stay on their nutrition plan, which is necessary for digestive and overall health.

ComfortStall is a more recent addition to Martin’s home stable in Wängi, Switzerland. They started with a seven-stall installation and are considering more in the near future. Again, Martin’s “horse sense” enabled him to see the benefits in the three-layered flooring system that includes a durable, one-piece top layer sealed to the stall walls and a layer of proprietary orthopaedic foam.

“I see that it’s good for them,” he explains. “They like to lay down on it, we can use less shavings and straw bedding and there’s less dust.”

When it comes to caring for the bodies of their elite equine partners, Martin is in good company giving his horses every edge available to proactive horsemen. In the U.S., Beezie Madden, McLain Ward, Margie Engle, Georgina Bloomberg and Jessica Springsteen are among show jumping peers who consider hay steaming critical to their horse’s health and performance. In Europe, Martin is among many contemporaries to enlist Haygain’s help going into what seems sure to be another phenomenal decade for this young horseman.